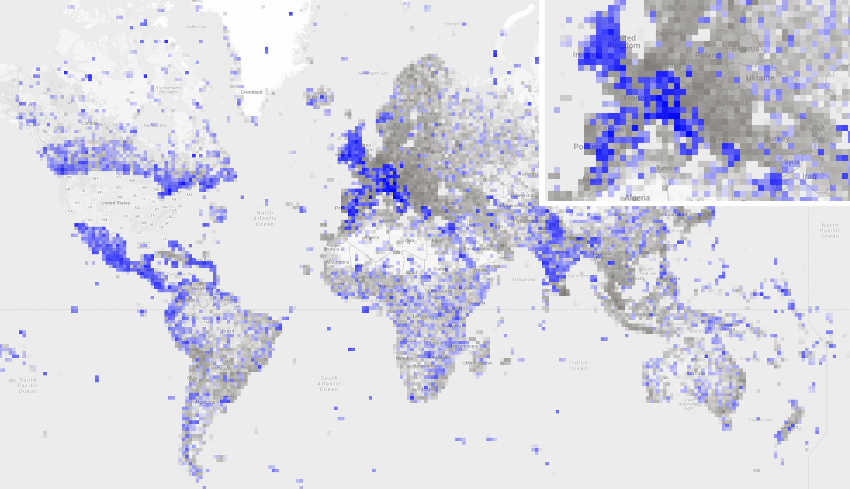 Rome2rio provides users with multi-modal travel directions to destinations that range from large cities down to exact addresses. With over 200,000 visitors daily, this provides us with a unique repository of data about travelers’ preferences for various destinations. Visualizing this data as heatmaps of popular destinations for users from specific countries allows us to gain some insight into the travel preferences of different markets.

We prepared heatmaps by processing all user queries on Rome2rio in 2014, mapping each query onto the user’s location (aggregated by country), and the co-ordinates of their searched destination. We visualized this data by producing per-country heatmaps for ten of Rome2rio’s top markets. Our heatmaps highlight regions that are more popular with users from a particular country than they are with users from other countries.

United Kingdom: Brits especially love France, Belgium, the Netherlands, the coast of Spain and southern Turkey (around Fethiye). The east coasts of the US and Australia are also popular. United States: Americans love the UK, Italy (especially Tuscany and Umbria regions) and other non-coastal parts of Western Europe. The Greek Islands and Israel are popular, as is India (perhaps NRIs searching for journeys home). Cuba is noticeably less popular, though we can expect this to change in view of improving relations between the two countries. Brazil users: South and Central America are naturally popular with Brazilians, as is Florida, New York and California. Of course, Portugal is a frequently searched destination and Italy rates a mention. In addition to the countries already mentioned, Rome2rio’s destination heatmaps also cover Germany, Australia, France, Canada and Italy. Share your insights and discoveries with us via Facebook and Twitter (@rome2rio)!

How to connect in the new, flexible normal