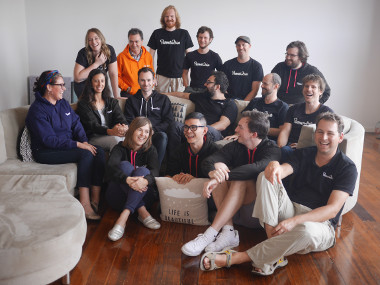 Some of the Rome2rio team

When my co-founder Bernie and I began to build the Rome2rio product, we drew heavily on our experience working at Microsoft in Redmond, Washington. As time passes and our team grows, we are consciously blending various cultural characteristics of US tech companies with our own Australian approach to work, to form a unique Rome2rio engineering culture. Here are a few of the things of which we are proud.

The key to a great engineering team is hiring the right people, so naturally we put plenty of effort into recruiting. We use the same style of interview loop process that Microsoft, Google, and other US tech companies employ, involving five or six hour-long technical and coding white-board sessions. The approach maximizes information for hiring decisions and gives the entire team a voice on who we ultimately hire.

We also like to move candidates quickly through the entire interview and hiring process. Paul English, the CTO for Kayak, wrote that they have a seven-day rule for hiring. We are not quite that fast, but certainly faster than most Melbourne companies. Typically it takes us two weeks from receiving a CV or referral to making an offer – it’s good to instill a fast-moving and decisive culture.

As we have written previously, we are thrilled with the quality of engineering talent in Melbourne and the team we have assembled so far. However, it has become apparent lately that our good fortune with hiring is not due to geography alone – the Rome2rio brand is a strong pulling force, and potential hires are pretty excited about the idea of working on the product. Several candidates have told us they have used Rome2rio to plan trips abroad and thought we were another Silicon Valley-based start-up until they spotted the job ad.

Workspace: keep it close and fun

The entire Rome2rio team, except for our global content staffers, sit within a few metres of each other. With so many complex engineering discussions happening every day, this arrangement is key to keeping development running smoothly and productively. Bernie and I have both witnessed the communication and political challenges associated with distributed and remote engineering teams. Keeping everyone together is a luxury that larger companies often cannot afford.

We are also passionate about making the work environment fun so that team members are keen to come in each day and enjoy working with people to tackle interesting, challenging projects. Basing Rome2rio at the Inspire9 co-working space in Richmond, Melbourne has been a big plus, with a fantastic community and plenty of free food, parties, talks and other events to make each week interesting. We are the largest team in the space and hope to stay based at Inspire9 until we grow too large, or they boot us out!

Meetings: keep them to a minimum

Engineers typically hate having too many formal meetings that get in the way of being productive, so we are pretty passionate about keeping meetings to a minimum. We hold a company all-hands meeting once per fortnight where we present new features, report on conferences, share management news and learn from experiment results. We strive to keep the meeting under one hour; anything more and the team gets restless.

We run a 10:30 am daily stand-up for the engineering team at the office pool table. Each person gives a quick summary of what they accomplished yesterday, and what they’re working on today. In theory, it’s 60 seconds each (but, of course, it often goes overtime).

At Microsoft, whenever somebody demonstrated a cool new feature it was customary to yell “Ship it!”. It’s usually a joke (the demo is often pretty rough around the edges) but also demonstrates a culture of bias towards action that we love, and have adopted. This culture includes doing regular releases to production (typically weekly) and minimising the amount of process surrounding making stuff happen. We don’t employ project managers and entrust engineers to drive a feature from concept to completion.

We introduced a new concept this year: Technical Debt Friday. The engineering team loves it; it gives them a chance to pause their regular development work and pay off any technical debt in the code base.

What is technical debt? As any code base grows there is an increasing amount of badly organised, poorly named, confusingly arranged, or no longer used functionality that should be cleaned up. The debt builds up and is increasingly costly – adding more code becomes harder, more error-prone, and it takes longer for new hires to understand what everything does.

So TechDebtFriday is a tradition where we allocate each Friday to cleaning up the code base. Perhaps tool X now actually does Y and Z but was never renamed. Perhaps class A represented two things; B and C, but, was never separated into two classes. Perhaps the load time of the product on our development machines has grown from 30 seconds to 60 seconds, but could be reduced again with some simple optimisations. Basically, anything that makes our life easier, but has no immediate gain to our end-users.

It is interesting to note that a few years ago engineers at Booking.com complained that paying off technical debt is frowned upon by management. We believe it has real value.

Software engineers often groan at the thought of a performance review. Some of our team have had bad experiences with them in the past, and they can be rather meaningless if done badly. However, we believe they are essential for any business that wants to celebrate accomplishments and reward hard work. Perhaps the only thing worse than performance reviews is not having them at all. This can lead to a culture where promotions are only given out to those that ask for them, or those that are threatening to leave.

We have been doing staff reviews regularly since we hired our first developer. We use them as an opportunity to discuss recent accomplishments. We talk about how the team member can further their career and have an even bigger impact within the team. We ask for feedback on how we can better support them and their professional development. It’s a chance to reassess salaries, with the philosophy of promoting people based upon already demonstrated growth rather than promoting with the expectation of new responsibilities.

OK, we’ve covered all the positive things so here is something we are not proud of – our engineering team is currently entirely male. We hope this is something we can improve with time, but fewer than 5% of applicants for engineering positions that we have advertised were women. We have done better with the non-engineering part of our team, with 40% female representation. It is good to see the Australian Government investing to address this imbalance in the tech sector generally.

Many of the ideas described here are not new, and we borrowed many of from our experience at Microsoft. Hopefully, they give an idea of the type of culture we are striving for within our engineering team here at Rome2rio.

Are you a software engineer that likes the sound of our work environment? Check out our jobs page. We are currently hiring.