A map goes unexpectedly viral, with help from Reddit & Gizmodo 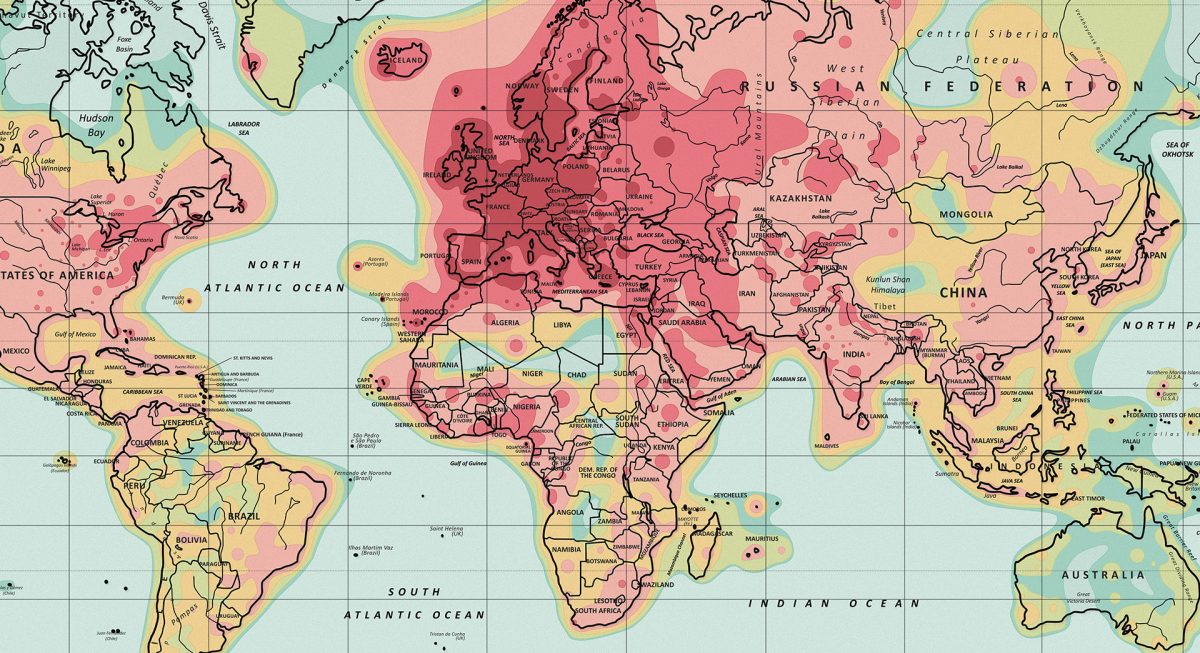 Recent media coverage of the isochronic map we developed, based on a 1914 map by the well-known London mapmaker John G. Bartholomew, provides a classic case study on how quickly things can flourish online. (We wrote about the map and made some observations about how clearly it shows our shrinking world back in January. This post covers a little more of the behind the scenes activity.)

Our engineering team first heard about the 1914 map in a Reddit discussion (which, in turn, referenced an article in The Economist’s Intelligent Life Magazine). One of Rome2rio’s senior engineers, Miles Izzo, wondered how an updated version of Bartholomew’s 1914 map would look. He began a collaboration with front-end design team member Andrew Greig to replace the 1914 lines from the original map with up to date information.

Miles used Rome2rio’s routing engine to generate a rough heat-map of the travel times from London to every airport around the world. Andrew then used the generated heatmap as a base to create the 2016 version of the world travel times map. Andrew quickly ran into some interesting problems. The first was that the 1914 map, produced before the introduction of satellite imagery and GPS coordinates, contained many inaccuracies, some of which made our current data look “wrong”. Miami, for example, appeared to be almost 200km away from its real location; many similar issues existed. A significant effort was required to redraw and move place names to their correct locations. In other cases, country names and borders had changed; again, plenty of re-work was required to match the current reality.

Within a few days, Andrew had completed a 2016 version, close enough in design so as to provide a direct visual comparison to the original data. One challenge remained: the “key” on the 1914 map divided the world into sectors that could be reached “within five days journey”, then “5 to 10 days”, right up to “over 40 days”. A new scale was required to accommodate the availability of jet airplanes and high-speed rail: if we had retained the original scale, the entire map, in the 2016 version, would have been within the red zone of “within five days”.

Having solved that problem, we contacted Jamie Condliffe at Gizmodo. Jamie had written about the 1914 map back in November, and we figured he’d be interested in our 2016 version. He was, and immediately wrote a follow-up piece. That story gained a lot of attention and was picked up in short order by mainstream media, including the Daily Mail and the Daily Telegraph, the online travel industry specialist Tnooz, and a wide array of independent blogs and news sites.

We also posted the new map to Reddit, where we had first noticed the 1914 map. Reddit users loved it; within days over a million users had viewed the Imgur-hosted image, and the post had over 5,500 upvotes.

But the ride wasn’t over! The folks at Wellingtons Travel, a UK company that specialises in “old-style” maps of London printed on high-quality paper and canvas, saw the coverage and contacted us with a proposal to license our 2016 map for sale worldwide. It was an easy decision to make: within a few days we’d agreed on terms and production was underway. Which should be good news for the many Reddit users who expressed an interest in buying a printed version, including this request from “spookmann”:

No problem, spookmann. Head over to Wellingtons and they’ll look after you. Meanwhile, we’ll get back to our normal occupations, helping our users figure out the best way to get from Rome to Rio. And everywhere else*, come to think of it.

* This example uses an unusual city pair. A Twitter shout-out to the first reader who can tell us why on @Rome2rio.