Which side of Niagara Falls should I choose (and how do I get there)? 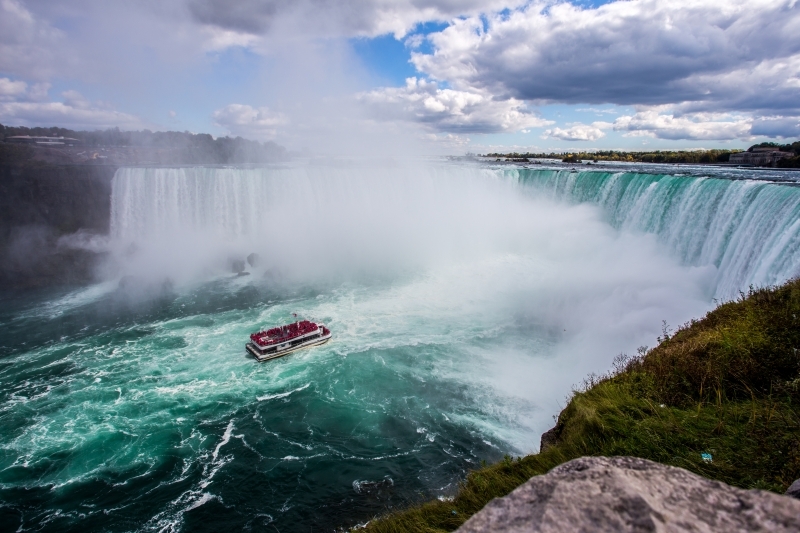 Which side of Niagara Falls should you visit? Does the American side or the Canadian side have the best views? Rome2rio reveals the best, cheapest and easiest ways to get to both sides of the falls – and across them – whether you’re travelling from the US or Canada.

Where is Niagara Falls located?

You can visit Niagara Falls in both the US and Canada, as the Niagara River serves as an international border between the two countries. The falls are about 17 miles (27km) northwest of Buffalo, NY, and about 80 miles (130km) southeast of Toronto, Ontario, by car. Each side has a city right by the Falls; appropriately, both are named Niagara Falls.

Read more: What documents do I need to cross Niagara Falls?

Which side of Niagara Falls is best?

Firstly, Niagara Falls is actually made up of three separate waterfalls. The Horseshoe Falls are the largest and most iconic, and are best observed from the Canadian side. The best viewing of the other two falls – Bridal Veil (the smallest of the three) and American – as well as the rapids leading up to the plunges, are from the US side.

But which side of Niagara Falls should you choose? Our advice: the thundering vision of 150,000 gallons of water plunging over the falls each second is so spectacular that it needs to be seen from both sides of the Canadian and US border, which runs right down the middle of the Niagara River. No matter how you choose to do it, it’s easy to get to Niagara Falls by bus, car and train from both nations.

Did you know that you’re pretty much guaranteed to see a rainbow from the Canadian side of the Falls?

How do I get to Niagara Falls from New York City?

The best way to get to the American side of Niagara Falls from New York City is by train. Amtrak’s Maple Leaf train from Penn Station is a scenic delight that follows the Hudson River and the historic Erie Canal. A car is quicker, but only if you take the (scenically boring) Interstate freeways. Buses require an inconvenient and time-consuming change in Buffalo and aren’t especially cheap.

TIP: On the train from New York City, sit on the left side for the best Hudson River views.

How do I get to Niagara Falls from Buffalo?

How do I get to Niagara Falls from Toronto?

We recommend the direct Via Rail train or the direct Greyhound or Megabus from Toronto for a relatively quick, scenic and affordable trip to the Canadian side of the falls. Otherwise, a car allows the most flexibility.

What are all my transit options to Niagara Falls from the US?

Road trip itineraries from NYC
Got a long weekend coming up? Niagara Falls make an excellent three-day roadtrip from the New York City area: with stops, it’s an easy day-long drive each way with plenty to see and enjoy going in both directions. With a full day in and around the falls, you’ve got the makings of a great long weekend.

You can drive the New York State Thruway via Buffalo (about 450 miles). This lets you stop off at top sights such as Fort Stanwix National Monument, which preserves a vital transport route as far back as pre-European-contact times, and Watkins Glen State Park, which has natural swimming pools amidst the sylvan splendour of the Finger Lakes.

An alternative route is via I-81 and I-90 (about 400 miles) and stop off in Corning for the world-famous Corning Museum of Glass or the family favourite, Steamtown National Historic Site near Scranton, Pennsylvania.

What are all my transit options to Niagara Falls from Toronto?

Where is the bus terminal in Niagara Falls?

The Niagara Falls Transit Terminal is on the Canadian side of Niagara Falls at 4555 Erie Avenue. This is where local buses, regional buses (Go Transit) and inter-city (Megabus, Greyhound) all stop and leave from. It’s 2 miles (3.3km) from the bus terminal to the Horseshoe Falls. A shuttle runs from here to the falls from mid-May to mid-October. At other times, you’ll need to walk or take a taxi.

Buffalo Niagara International Airport (airport code: BUF) has service from major US airports and is 20 miles southeast of the falls.

In Canada, Toronto Pearson International Airport (airport code: YYZ) has services from cities worldwide and is 123km by road to the northwest.

How do I get to Niagara Falls from the airport?

From Buffalo, Niagara Falls and Toronto airports, you’ll need to organise your own transport (renting a car is the best choice). Because of this, as well as the cost and hassles of air travel, flying is not a popular way for vacationers to reach the Falls.

Do I need to cross the Canada-US border once I’m at Niagara Falls?

Any visit to Niagara Falls should include a border crossing so you can best experience all three waterfalls.

The first person to go over the falls was a 63-year-old teacher in 1903. She travelled over in a barrel.

Simply walk across the Rainbow Bridge; the distance between the best viewing spots on the American and Canadian sides is about 2 miles, and the walk offers spectacular views and beautiful gardens along most of the length.

Walking also has the advantage of avoiding all the hassles of driving. At busy times, the Rainbow Bridge, which is closest to the falls, can have long back-ups at the immigration inspection stops for vehicles, while pedestrians rarely have a delay.

Read more: What documents do I need to cross Niagara Falls?

Are there any other ways to cross the border at Niagara Falls?

Other bridges between the two countries are much more distant and prone to traffic delays. The Whirlpool Rapids Bridge (2 miles downriver) is only for holders of Nexus cards, which allow expedited border crossings. The Lewiston-Queenston Bridge (8 miles downriver) links the two of the main highways in the area, US I-190 and Canadian Hwy 405.

TIP: Niagara Falls shuttle bus
Both sides of Niagara Falls have handy shuttle bus services that connect the various sights and attractions. The Canada service will take you to the Rainbow Bridge; the US service includes the nearby state parks (Falls State Park, Whirlpool State Park).