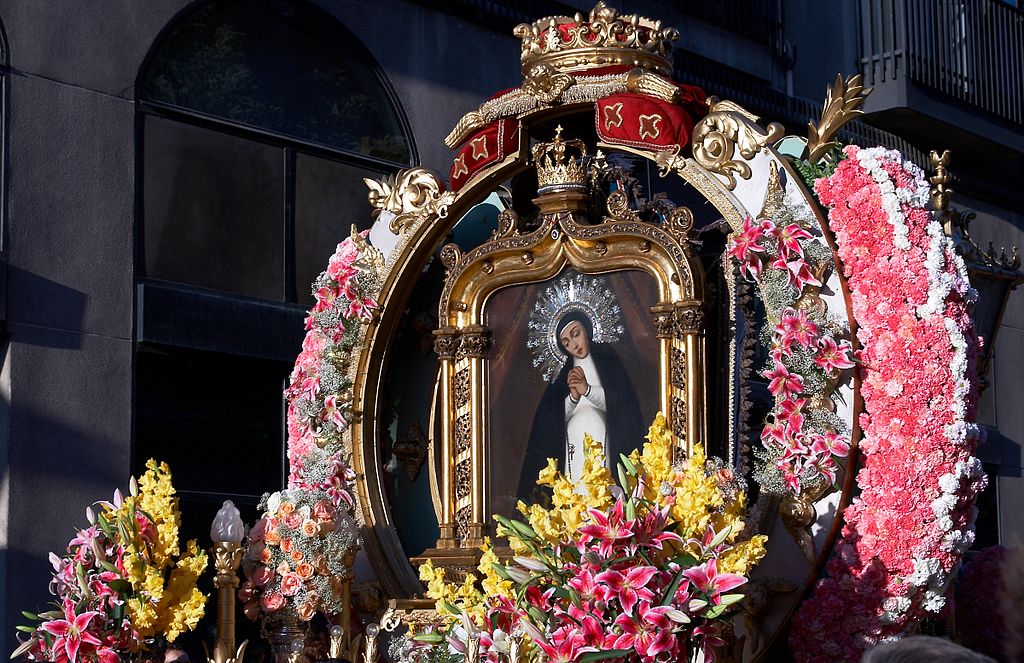 The festivities start with religious processions before moving on to street parties (Credit: Wikimedia Commons)

There’s nothing Spaniards love more than a party, so we’ve come up with a stellar 3-week summer festival itinerary that’ll take you from the heart of major cities to small towns in the countryside. From street parties, parades and dance performances to religious traditions dating back to the Middle Ages, you’re bound to have one of the most exciting festival experiences in this part of the world. Pack your bags, it’s fiesta time!

Where are these festivals in Spain?

The celebrations start in Madrid for the La Paloma festival, before moving on to Barcelona for the Gracia Festival and the nearby town of Sitges for the St Bartholomew Festival. You then head to the birthplace of paella, Valencia, where you’re within easy reach of the La Tomatina festival in Bunol, and the Fiestas de La Mare de Déu de la Salut in Algemesi.

Related articles:
Train travel in Spain: A guide to Renfe
What are the different types of trains in Spain?

Kick off your festival itinerary in the heart of the Spanish capital, for some non-stop celebrations in the La Latina neighbourhood. Typically held in the second week of August, this is one of the most traditional and well-known festivals in honour of the Virgin of Paloma, starting with religious processions before moving on to carnivalesque street parties. Nothing surpasses Madrilenos’ love for entertainment, so expect live music, delicious food, traditional costumes, street parades, colourful lamps and impressive fireworks displays. If you want to be in the thick of things, head to Plaza de la Paja and Paloma and Toledo streets for the heart of the action. BYO high energy levels!

Most international airlines fly direct to Madrid a few times a week.
Metro from Madrid Barajas Airport to the city centre: 30 minutes

Where to stay in Madrid:

A central location is always wisest. As the festivities are in the colourful La Latina neighbourhood, you could base yourself there or look at accommodation in the surrounding suburbs such as Sol-Gran Via at the heart of the city centre, Lavapies (near Madrid Atocha station), the historic Austrias, or even the trendy Chueca and Malasana neighbourhoods that are easily accessible by metro.
Book your Madrid hotel here

Barcelona is a traveller’s dream with its mix of Catalonian culture, gourmet cuisine and stunning architecture. The festival, touted as one of the most vibrant street parties in the country, is held in the Gracia district famed for its boho culture, trendy bars and restaurants and architectural attractions. The festival attracts over 1.5 million visitors each year, and takes place in the historic part of the neighbourhood called Vila de Gracia. Packed with free concerts, Catalonian food stalls, beautifully decorated streetscapes and plazas, folk dancing and activities for the entire family, you know you’re in for one awesome block party. Check out the Castellers who form human towers that can sometimes reach more than 10 people in height!

Where to stay in Barcelona:

Finding accommodation in the Gracia area is the best way to immerse yourself in the festivities. Alternatively, El Born is ideal for its central location, as is Barri Gotic (Gothic Quarter), Las Ramblas and even Barceloneta Beach if you’d like a room with an ocean view. The city’s excellent metro system easily connects you to all the different neighbourhoods.
Book your Barcelona hotel here

A stunning seaside town south of Barcelona, Sitges in next up on the festival hit list. Home to a vibrant Catalan culture, the St Bartholomew Festival honours the patron saint of Sitges over a two-day period. The Fiesta Mayor or ‘main party’ sees a collection of traditional folk dancers and musicians, and costume parades undertaking a procession through the streets of Sitges. Declared a Festival of National Tourist & Artistic Interest by the Catalonian government, the festivities cultimate in a stunning 30-minute fireworks display that can be seen across the town, and from the sea if you’re lucky enough to snag a boat ride that evening.

From Barcelona Passeig de Gracia station, hop on a direct train into the town centre of Sitges.
Train from Barcelona to Sitges: 40 minutes

Where to stay in Sitges:

The beauty of a small town is that you’re able to get to the festival quite easily from anywhere. The town centre area, near Plaça Cap de la Vila, is a good place to look at, as is the Old Town area near the Església (Church) of Sitges or anywhere along Sitges’ 17 (yes, you read that correctly) beaches.
Book your Sitges hotel here

Held on the last Wednesday of August, La Tomatina transforms the sleepy town of Bunol into a riot of tomato-throwing festival goers. Kicking off the festivities in the morning, truckloads of tomatoes are driven into the town centre where the giant food fight ensues. What’s dubbed as the World’s Biggest Food Fight begins when a reveller climbs up a greased-up wooden pole to pluck the coveted ham suspended at the top. The signal for the start of the tomato fight is the firing of water cannons, and for one hour, more than 100 metric tons of over-ripe tomatoes are thrown in the streets. It’s no running of the bulls, but an epic tomato fight is up there as one of the top travel experiences in the world. For crowd control purposes, Bunol now charges for admission to the festival – you’ll need to purchase a ticket in advance to ensure entry into the city’s festival grounds.

We recommend staying in Valencia and travelling to Bunol for the festival. There is much to see and do in Valencia, especially during the summer months, so add a few more days to your itinerary to make the most of your visit.
Book your Valencia hotel here

And if you’re still in celebration mode, there’s one more festival you could check out just as summer’s winding down..

The final festival on the itinerary is a dive into culture and history. Around 35km south of Valencia is the small town of Algemesi, host of the tongue-twisting Fiestas de La Mare de Déu de la Salut (Virgin Mary of Good Health). Held in honour of the town’s patron saint, the festival, which showcases unique Valencian culture and traditions, attracts thousands of people and was awarded the UNESCO Masterpieces of the Oral and Intangible Heritage of Humanity designation in 2011. Theatre, music and dancing are on the agenda, featuring handmade costumes and accessories dating back to medieval times. Don’t miss the spectacular muixeranga, an acrobatic dance of human towers that’s guaranteed to take your breath away!

Where to stay in Algemesi:

Easily accessible by train from Valencia, you won’t have to move festival bases to check out the sights of Algemesi. If the small town vibe is what you’re after, you could rent an Airbnb from one of the locals.

Once you’re all partied out, Valencia’s Manises Airport serves direct flights back to Madrid or routes to major European hubs for your onward travel.