Travelling around the UAE 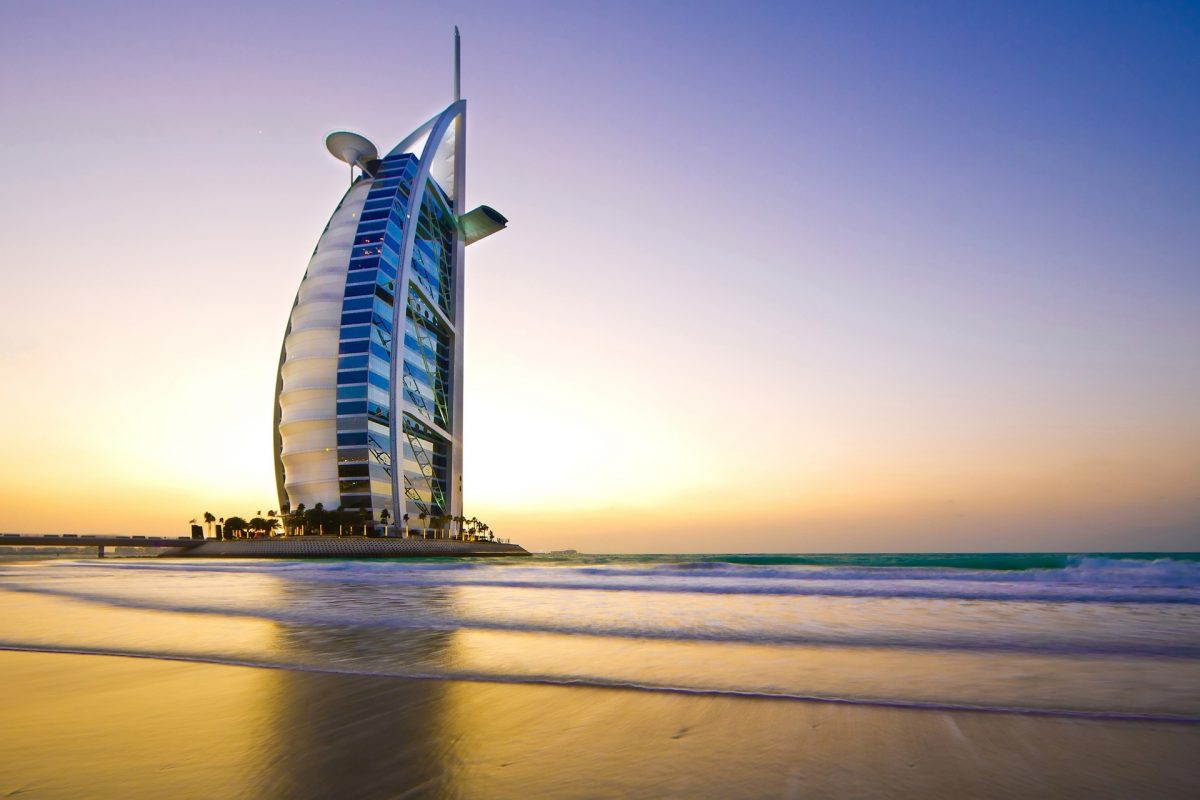 Flying into the United Arab Emirates, you’ll see a desert vision of sky-puncturing towers and Xanadu-like five-star hotels. The two main entry points are the closely connected twin cities of Dubai and Abu Dhabi, both thrill-a-minute proposals with a motherlode of record-breaking superlatives. Be it biggest, fastest, highest or glitziest, the UAE has it all – and then some.

Where should I go?

Both Dubai and Abu Dhabi compete for the wow factor, but they could hardly be more different. Dubai offers fantasy weekends with highlights including the Burj Khalifa, the world’s tallest tower with its 125th-floor observation deck, and the Dubai Mall, home to a leviathan-sized aquarium.

Fortunately, buses and affordable taxis connect the two in as little as 1 hour 20 minutes, making it possible to see the best of both cities on even just a short trip.

What’s the best Dubai airport to arrive at?

Dubai International Airport, one of the world’s busiest, is located in Al Garhoud, the heart of the city’s traditional centre on the bustling eastern side of Dubai Creek. The majority of international connections, including all Emirates flights, land here, with a number of fast, no-hassle options into the city. Taxis cost from around Dhs80, and the airport is served by Dubai Metro’s Red Line at two stops, Terminals 1 and 3. To travel on the metro you need to buy a Nol paper ticket or reusable top-up card, available at all stations (from about Dhs6).
Taxi from Dubai airport into the city
Metro from Dubai airport into the city

What about Abu Dhabi?

Unlike Dubai, Abu Dhabi International Airport is on the fringes of the city limits, adjacent to the entertainment-and-leisure hub Yas Island. With a limited bus network and no metro or trains available at all in the city, a metered taxi, which you can flag from outside the terminals, is by far the easiest option and costs around Dhs80.
Taxi from Abu Dhabi airport into the city

The most convenient bus is the green-and-white A1 route to Al Zahiyah in downtown (runs hourly or every 30 minutes depending on time of day; 24 hours; Dhs4). You can catch this from outside the terminal.
Bus from Abu Dhabi airport into the city

It’s also worth checking with your hotel prior to arrival – either in Dubai or Abu Dhabi – as many offer free shuttle buses to and from the airport. Both Abu Dhabi-based carrier Etihad Airways and Dubai’s Emirates also offer free inter-Emirate bus connections from either airport to Abu Dhabi, Dubai or Al Ain for all passengers, regardless of where you land (pre-booking up to 24 hours prior to your flight is advised to ensure a seat).

What’s the quickest and easiest option to get around?

Taxi. Few cities are so dependent on cabs as Dubai and Abu Dhabi; without them both cities would grind to a halt. In Dubai, while you’ll likely spend longer in the traffic-clogged streets than you’d like, taxis are safe, reliable and incomparably convenient. Daytime fares cost from Dhs5, with a 10km journey across town from Bur Dubai to the Mall of the Emirates costing around Dhs40. Another great way to travel is with popular Uber-style digital cab service Careem.

Likewise in Abu Dhabi, the government runs reliable metered taxis (Dhs3.50 flagfall) and a popular pink-trimmed, ladies-only service (order through the TransAD call centre on 600 535353; the service is also available in Dubai on 04 2080808). While taxis can be ordered via app or through the call centres, they’re easy enough to hail on the street or outside one of the ubiquitous shopping malls or five-star hotels. Bear in mind a minimum fare of Dhs12 is in effect at all times.

TIP: If you have time on your hands, take the bus in Dubai. Commonly used by low-income workers – and almost never by Emirati locals – they are dirt cheap (from Dhs3), but rather circuitous. There are nearly 80 routes to choose from and swipe-once Nol cards – issued from bus stop vending machines – must be used.

Is renting a car worth it?

Only if you plan to head out into the desert, to explore places such as Al Ain or Liwa Oasis. There are dozens of rental companies to choose from, including all the major players like Hertz, Avis, Budget and National. They offer a variety of fluctuating rates and packages, so shop around before making your booking.
Book a rental car

Driving in the UAE is perfectly safe, although locals have a tendency to show off in their supercars and speeding is the norm. When in Dubai, bear in mind you’ll also have to pay SALIK, the city’s road toll system that automatically deducts a Dhs4 fee from a sticker tagged to the windshield every time you pass a toll gate.

TIP: Make sure you know a few nearby landmarks to help your taxi driver avoid driving around in circles. Many drivers don’t know their patch as well as they’d like, while to complicate matters dozens of streets don’t have signposted names. As an unusual UAE-ism, taxi drivers also love referring to either the ‘frontside’ or ‘backside’ of a well-known building.

What about the Metro?

The air-conditioned Dubai Metro offers a scenic, more relaxing alternative to a taxi, but its scope is limited and for point-to-point journeys is the more time-consuming option. With temperatures regularly slipping over 35–40C from May to October, ask yourself whether you’re happy walking outside in the heat to get to your final destination. Also bear in mind that Dubai hasn’t been designed as a walking city and there are few pavements. So, while the distance between a Metro stop and hotel or restaurant may seem insignificant, it’ll likely involve a highway crossing – or indeed a taxi ride.

Though it would definitely benefit, Abu Dhabi has no metro, trains or trams.


TIP: If you plan to make several short trips in Abu Dhabi, buy a temporary Hafilat swipe card (from vending machines in shopping malls, bus stations and shelters) for use on all buses (from Dhs5; valid 14 days).

How do I get between Abu Dhabi and Dubai?

It’s easy. With a taxi costing around Dhs250–350 to cover the 140km, shuttling between Dubai and Abu Dhabi by bus is the far better idea.

FACT: It may sound like pie in the sky, but if you can wait for a few years, the fastest way could be by Hyperloop, the Sir Richard Branson- and Elon Musk-backed high-speed transportation system that promises to do the journey in a mind-boggling 12 minutes.

What’s the most interesting way to travel?

Definitely an atmospheric trip across Dubai Creek to the Deira souqs on an abra, a traditional wooden water taxi. The fare is Dhs1, paid directly to the driver. Alternatively, a ride on the city’s futuristic Metro, particularly along Sheikh Zayed Road, is Instagram-worthy. Here’s more information on all city transport fares, routes and timetables.


TIP: Abu Dhabi’s Yas Island is home to a number of attractions, including Ferrari World and the Yas Waterworld theme park. The free Yas Express shuttle bus completes a circuit of the island each hour and is available to all Yas Island guests.

Where else can I go?

Getting to Al Ain is easy with regular bus departures from Abu Dhabi’s Al Wahda Bus Station (140km; 2h 20). While it’s possible to get a bus to Muscat, the capital of Oman, it’s a long 6-hour journey (take Service 201) and the vast majority of people opt to fly instead (1h). If you’re considering travelling onwards to Qatar, Bahrain or Saudi Arabia, then taking a flight is also the best bet.
Bus from Abu Dhabi to Al Ain
Fly from Dubai to Muscat
Fly from Abu Dhabi to Muscat

TIP: Rush hour can be a major headache, particularly in Dubai. Avoid trouble spots like the commuter routes to neighbouring Emirate of Sharjah, for instance, and you should have few problems. If getting to either airport by taxi, give yourself plenty of time. It’s not uncommon for transit stoppers to miss their flight because of a traffic jam.