Winter Olympics, South Korea: Getting there and getting around 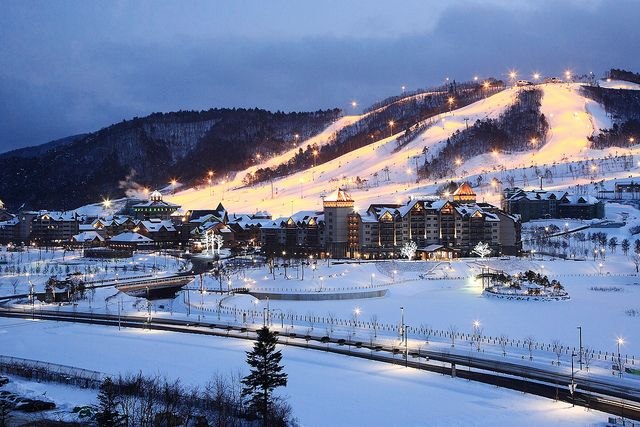 Pyeongchang is the site of the 2018 Winter Olympics (Credit: Republic Of Korea/Flickr)

Let’s start with size: South Korea is small. It’s only a third of the size of Germany; a quarter of the size of Japan; and a fifth of the size of California. A train ride from Seoul, near the north-western border with North Korea, to Busan, on the south-eastern coastline, takes only three hours.

The cheapest option for getting into Seoul from the airport is the airport train, AREX. Trains leave Incheon International Airport every ten minutes and the journey takes an hour. South Korea has an excellent high speed rail network, including a new service that operates from Incheon International Airport to Seoul — and then out to Gangneung, in the heart of the Olympics zone. These high speed trains (KTX) will leave hourly over the Olympics period, and are a comfortable way to get to the heart of the action.

There are great bus services that runs frequently from the airport, or grab a taxi to your downtown hotel. Both take around an hour or so, depending on traffic.

Within Seoul, you’ll find the extensive and super-clean subway system will get you across town quickly and at low cost, though you won’t see much of the city that way. Taxis are plentiful and cheap, and really are the best way around town if you’d like to actually see the city and not the underground!

Uber, the rideshare service, does operate in Seoul. There’s also a very popular Korean rideshare service, Kakaotaxi, but the service is just the same as hailing a taxi, so unless you speak Korean we wouldn’t suggest downloading their app. Frankly, taxis are everywhere and the fares are  reasonable, so that’s our recommendation.

Getting to the games

From Seoul, the KTX train is your best option; Korean Rail have created a special pass that operates from 1 February to 25 March 2018. You can buy your pass here, and although the system is a little tricky you’ll find it’s a lot easier to do the work in advance than to line up and buy one at the station once you’ve arrived.

Once you’ve arrived at the station in Gangneung, you’ll find official and free shuttle buses headed to each of the sporting venues. More information on trains and the shuttle service is available here.

You could rent a car and drive over from Seoul, but there will be loads of restricted areas and no-go zones for private vehicles, while train passengers will enjoy easy access via direct shuttles to every venue. Take the train!

You’ve come all this way, why not see a little more of this beautiful country? The trip down to Busan, a coastal city with over 3 million people, is relaxing, scenic and not at all like the zombie apocalypse film Train to Busan which set the box-office alight when it appeared in 2016. Relax, it’s just a movie.

You could have another type of adventure, though, with a visit to the DMZ between North and South Korea. Making headlines nowadays, the DMZ is well worth a visit, although to do so you’ll need to buy a spot on an organised tour. You can find more information about the DMZ and tours here. Go on, live dangerously!