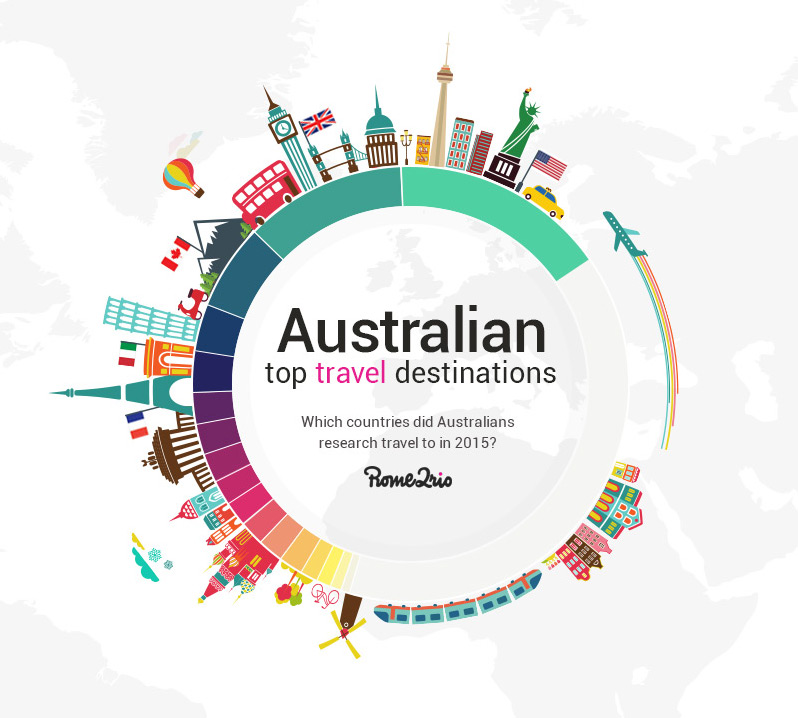 Australians are a well-travelled bunch – the Australian Bureau of Statistics (ABS) reports that in 2014, over 9 million Australians headed overseas. Members of the Rome2rio team are no exception, having recently been to Toblach and San Gimignano in Italy, Alpe d’Huez in France, Ronda in Spain, Kona in Hawaii, Key West in Florida, and Rosarito in Mexico.

When we’re not travelling, we’re often talking about travel, about places we’ve been and places we want to go. This passion and curiosity prompts us to ask questions about the world around us; questions like; where are Australians looking to travel? And when do they travel? To find the answers, we processed and aggregated a year of search records from Australian users of Rome2rio that searched for flights to destinations outside Australia.

We found that across all Australian states, Northern America and Europe were the most popular destinations for travel planning during 2015. The United States lead with 17.2% closely followed by the United Kingdom at 13.2%.

Comparing our data (which records travel searches) to data published by the ABS (which records departures) for the same period, we found that destinations ranked differently. The top two countries by departures are New Zealand and Indonesia, which rank 9th and 12th respectively by number of searches. This ranking suggests that New Zealand and Indonesia are destinations that are already well-known and Australians are thus less likely to be searching for information on how to reach them. By then analysing when users searched for outbound and return flights (with dates) we were able to determine when they intended to travel during the year. We found that the Winter holidays and Christmas/New Year were by far the most popular times that Australians were planning to travel outside Australia while Easter was less popular in comparison. There were also notable spikes around Valentine’s Day and the week just before the Spring school holidays.

2016 is off and running and we are keen to see if there are any changes in this data this time next year. What do you think will be popular? Where are you planning to visit in 2016?

Source: Rome2rio logs of search requests made by users with Australian IP addresses from January to December 2015.

Hotel bookings on Rome2rio: when, how long, how far ahead?